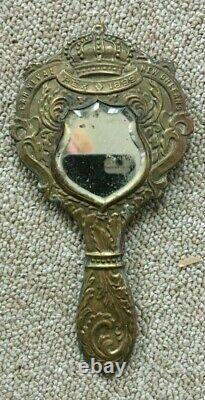 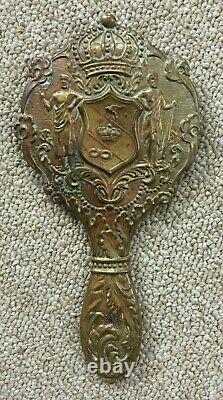 Mardi Gras 1899 Krewe of Rex Ball Favor Hand Mirror. This very rare item was given to members' wives and lady guests as a keepsake to commemorate the 1899 Krewe of Rex Ball. The piece is constructed of two sides of intricately back-stamped brass joined together to yield wonderful front and back detail of the ornate design which is roughly 6 1/2 high. The front reads, " Carnival New Orleans" and "Rex 1899" above the shield-shaped mirror which mimics the Krewe's shield-shaped crest of that time on the back.

There are no dents or scratches, only some small issues with the mirror's silver coating (see photo). A third photo shows the overall depth of the piece as roughly 3/4 at the middle. What makes this piece particularly unique? Mardi Gras Day happened to land on Valentine's Day, February 14, 1899, which turned out to be the coldest-ever Fat Tuesday in New Orleans' history with a low of 22 degrees and a high of 38 degrees F. With snow and sleet falling.

The people of New Orleans were concerned as to whether Rex would cancel their parade. However, the publics' fears were allayed when Rex put out a proclamation in the Times Picayune newspaper several days prior to Mardi Gras stating that the parade would roll as usual, despite that week's unusually cold temperatures, provided that the good people of the City cleared the parade route of snow and sleet in front of their homes. The people did just that, so the Rex parade rolled as usual, but in that year, in the most frigid temperatures in the City's history. This item is in the category "Collectibles\Holiday & Seasonal\Other Holiday Collectibles". The seller is "750roadster" and is located in this country: US.

This item can be shipped to United States.